The official RT Week fell on our Student Success week at Conestoga, so the Conestoga Respiratory Therapy Federation (CRTF) and the faculty planned a number of events during official RT Week and the week before. On Tuesday October 15th, 2019 the first and second years got together to kick off our RT Week celebrations by sharing poster board presentations, not only with each other but with all students at the college.

The first years’ topics pertained to the different places RTs can be found in the workforce. The second years’ researched and presented different conditions and disease processes affecting neonates as part of their neonatal and pediatric respiratory care class. Both classes displayed and presented fantastic, interactive poster boards to faculty and peers.

In addition, one of our instructors, Tim LePage, set up a hands-on station that allowed the students to observe mechanical ventilation of a pig lung and adjustments to the ventilator settings in order to visualize the effects of different mechanical ventilation parameters. They were also able to try their luck at intubating one of our mannequins with a Glidescope. At the end of the event, one 2nd year group and one 1st year group were awarded Best Poster Board. These poster boards were not only informative but creative. Congratulations to our 2nd year winners Coleman, Jackie and Lindsey for a job well done on your spina bifida poster; and a job well done to our 1st year winners, Sheena, Saira, and Alison for a wonderful poster showing the role of an RT in the PICU (Pediatric Intensive Care Unit).

During the week of October 14-18, the CRTF held our annual Thanksgiving food drive. All the items, along with generous donations were given to the Conestoga Students Inc. (CSI) Food Bank, a partner agency of The Food Bank of Waterloo Region. The CSI Food Bank distributes regular, vegetarian and family-sized food hampers with a 3-day supply of non-perishable food items and the choice of a couple of hygiene items. Students can apply to receive a hamper once per calendar month. The CSI Food Bank is an emergency food support service for students who are struggling financially or experiencing a tough situation. The whole program including faculty came together in a short amount of time to raise over $200 and almost 650 lbs of non-perishable food items. 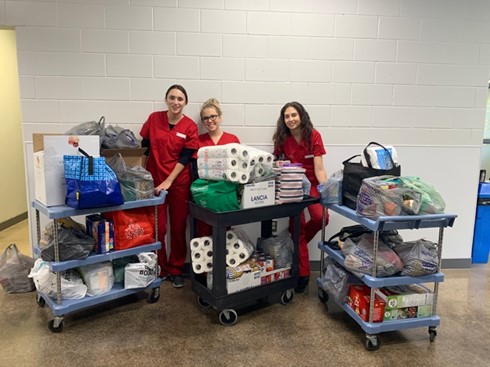 On Friday, October 18th we hosted our 13th annual Airway Olympics as well as two social events. For the Airway Olympics, 20 teams of 4 people consisting of 2 first year and 2 second year SRTs got together to battle it out for the coveted Conestoga Sputum Cup.  We started with 5 heats of 4 teams and each winning team moved on to the final round. The initial rounds had the first-year students intubating manikins (for the very first time!), with the second-year students guiding them. For the final round, the faculty announced that the teams would be intubating the mannequin, but with a twist — the mannequin would be sidelying for the duration of the round. It was a fast-paced, entertaining, and down-to-the-wire round. Nearly every first- and second-year student participated this year, and it was competitive and fun for everyone involved. There was so much enthusiasm shown by the 1st years’ who were eager to intubate, and great teamwork shown by every single team member. 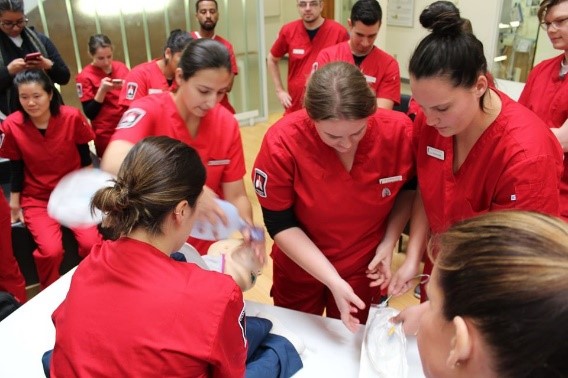 PROST! The SRT’s also had a fun social night full of polka-ing and games after a long week of evaluations on October 18th, 2019. It was a great way to de-stress and celebrate a lasting tradition for the Kitchener-Waterloo area. We were able to watch traditional German dancing and listen to the traditional Volksmusik performed by the live band. There was also a keg tapping and many different food vendors displaying the classic German dishes. This was the first time we were able to socialize together as a group since our welcome BBQ in September. 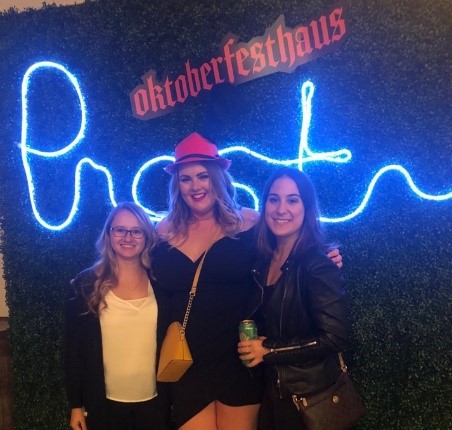 The Respiratory Therapy Society of Ontario held its inaugural INSPIRE Conference, a provincial Respiratory Therapy conference in Toronto on Saturday, October 19th. The evening before the conference, the Conestoga Respiratory Therapy Federation hosted a social night for all the SRT attendees at The Rec Room in downtown Toronto.  This event was well attended with students from Conestoga, Michener and St. Clair co-mingling and playing games. It is important for students from different schools to get to know one another so that we can share and learn from collective and varied experiences. The social night was a fun night that was well deserved for our hard-working students during a stressful midterm exam season! 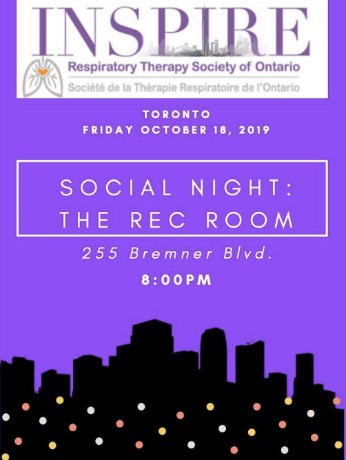 The week leading up to RT week, Nadia and Hannah G. recorded a radio interview with the producer of Conestoga College radio station CJIQ 88.3FM. We went to the recording booths in the Conestoga Doon campus and sat down with Luke Notman to talk about what a Respiratory Therapist does and specifically to promote the upcoming RT Week, to promote the RT profession and get the rest of the school and the Waterloo region involved in what we do. The interview ran daily throughout RT Week from Sunday, October 20th to Saturday, October 26th on CJIQ 88.3FM. This was a fun, informative, great way for us to get involved with other programs in the school, as well as a fantastic opportunity to bring awareness to our profession. 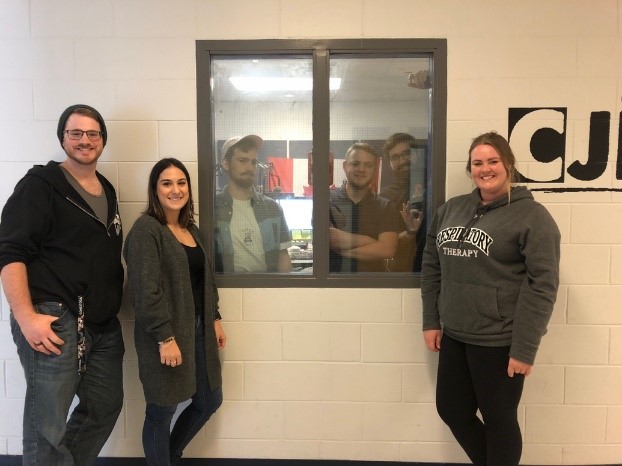 During our Student Success Week, Conestoga College held their annual College Fair/ Open House on October 22, 2019. This event provided opportunities to learn about the programs and services Conestoga has to offer. Faculty, students and service providers were on-hand to provide information and answer questions. The college fair was also a place to meet representatives from many other Ontario colleges to learn more about the various schools and programs available. There were many first- and second-year students who volunteered to represent our program at our Respiratory Therapy Booth, answering any questions potential prospects had.

Our faculty got involved in what was our most successful RT week activity. The Conestoga Respiratory Therapy Federation (CRTF) organized a fundraiser for Lisaard & Innisfree Hospice, a local hospice house in Kitchener. The RT program faculty and instructors got together and not only wrote RT-inspired songs, but performed them in the style of James Corden’s “Carpool Karaoke”, calling it “CaRT Karaoke”! We produced 5 videos and released them on the CFRT Facebook page one by one throughout RT Week, setting fundraising targets with a goal was to fundraise $350.  We ended up raising over $1,100 for Lisaard & Innisfree Hospice! We were not only surprised by how much money we raised, but by how many times the videos were viewed and shared across the Canadian RT community and we were specially impressed with Tim Lepage’s rapping skills. The videos included some of our faculty inside a vehicle, singing their own RT renditions of classic songs like “ Let it Be” (ABGs), “Beauty and the Beast” (Sputum and RTs), “Walking in Memphis” (Using the Glidescope), and “Jump on It” (Troponin). The grand finale, sung and rapped by our very own Tim LePage and Gino DePinto, was a rendition of the much beloved Z Dogg MDs’parody “Ventilate”. While we won’t be winning any Grammy awards any time soon, we are very happy and blown away that so many people and especially RTs from across Canada were able to view, comment, and share our videos as well as donate to this incredible cause that is so integral to our community. 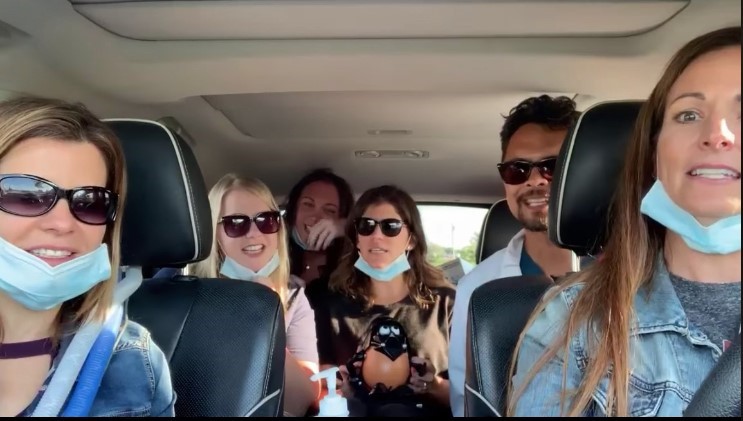 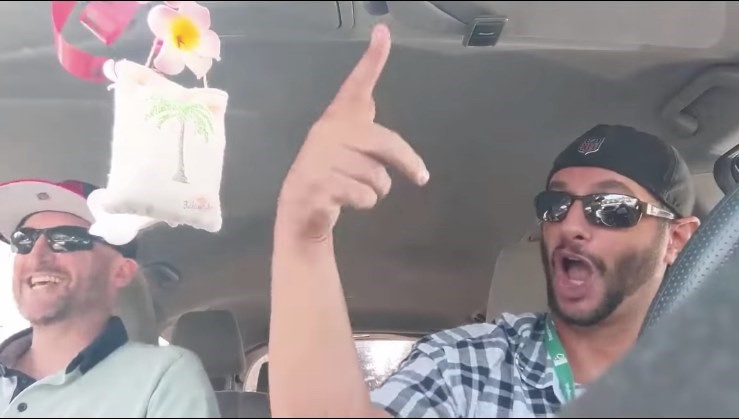 Overall, RT Week 2019 at Conestoga College became an action packed 2 weeks where we connected as a program, shared a lot of laughs, and made some awesome memories!  J Happy RT Week from all of us in red!