RT Week at The Michener Institute of Education at UHN

October 2019  marked more than just Thanksgiving and Halloween Festivities, it also ushered in another year of celebrating the contributions of RTs in the field of healthcare and bringing awareness to their on-going and vital role in the care of patients throughout Canada.  Contributing Authors:  Anum Ahmed, Alexandra Connolly,Krista Gagnon,  Harry Kanathasan, Kathleen Olden-Powell, and Aiswarya Rama 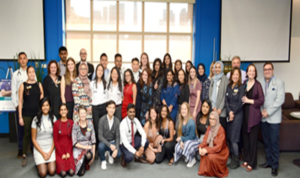 This year’s RT week celebrations commenced with Michener’s annual stethoscope ceremony. This event provides an opportunity to acknowledge the achievements of 2nd year students thus far, and allows them to show their commitment to the profession in the company of family, faculty, and peers. Keynote addresses were delivered by representatives from  Michener’s Executive Committee, RT’s Without Borders, recent program grad Sam Gennedakis, and Fiona Cherryman (the former chair of Respiratory Therapy at Michener). The ceremony was followed by a wonderful pizza lunch sponsored by AstraZeneca.

Later that day, the students from both  Michener’s and Conestoga’s RT programs met to have a student social at the REC Room in Toronto. This meet and mingle allowed students from both institutions to interact and get to know each other in a fun setting. Friendly competition with good food allowed students to get to know their future colleagues and bond over experiences in their respective programs. It was an eventful day. Hopefully an evening student social will become an annual event. 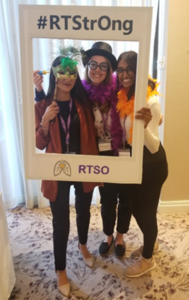 A group of  Michener RT students and alumni attended the RTSO’s INSPIRE 2019 conference held in Toronto. It was an excellent opportunity to learn about the multifaceted role RTs play in the healthcare milieu. Attendees also got to see the latest innovations in the field, both in terms of technology and clinical practice. Workshops and talks about difficult airway management, FLUSSO, and interpretation of clinical evidence were just a few of the many interesting seminars the students attended. Overall it was a wonderful event and a great opportunity to learn and meet with professionals within the respiratory therapy community. 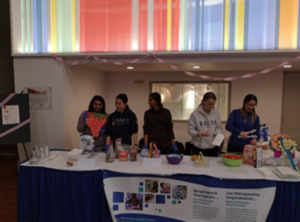 Michener’s RT Week continued with the beloved Bake Sale and Yogurt Parfait breakfast fundraisers. The proceeds of both events were donated to RT’s Without Borders to aid in their continued efforts in Nepal. The bake sale was an unequivocal success, selling treats to fancy the tastes of all who have a sweet tooth and those without a sweet tooth. The Yogurt Parfait Breakfast was also a big hit, with various yogurt toppings including: peanut-free granola, chocolate chips, strawberries, blueberries, bananas, and wafers, giving participants a healthy and delicious start to the day. Many  of the 1st and 2nd year RT students contributed to the cause along with encouraging friends and staff from other programs. Both staff and students made both fundraising events a glowing success. Sweet treats for a good cause is always a winning combination. 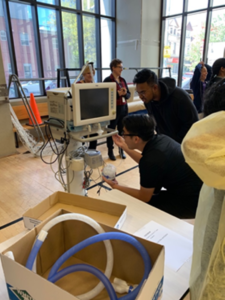 The week concluded with the long-standing and highly competitive  RT Olympics.  In this event, a pair of 1st year students were grouped with a pair of second year students to complete a series of challenges.  The second-year students had to perform tasks that they had not practiced since last year, with only verbal assistance from one of their first-year teammates. On the flip side, the first year students performed tasks that they have yet to learn, such as setting up appropriate oxygen therapy via an oxygen cylinder, and  circuiting a ventilator. These tasks were completed with only verbal instructions from one of the second-year teammates. Competing teams were cheered on by onlooking peers and faculty.  Friendly competition with jokes all around was the best way to end the week. 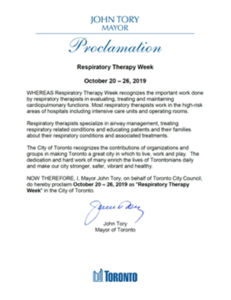 Aside from these major highlights, RT Week also consisted of a few other events that cannot go without a mention.  The RTSO organized the lighting of the CN tower, which was lit up in RTSO colours of purple and orange. Mount Sinai hospital put out a request for the RT community to design a T-shirt for RT week. Talented third year student, Carol Zhang, designed a lovely shirt that was chosen by Mount Sinai. The shirt was purchased by many Michener Institute students. Mount Sinai then donated back a portion of the T-shirt  sales to Michener,  which was then donated to our charity of choice, Respiratory Therapists Without Borders (RTWB). Finally, third-year student, Isabelle Grise, was in contact with Mayor John Tory, providing him with information on the importance and  dedication of Respiratory Therapists in healthcare and the field of respiratory care.  With great recognition, Mayor John Tory officially announced the week of October 20th to October 26th, 2019 as Respiratory Therapy Week in the City of Toronto.  We had an amazing RT week this year and hope to continue this amazing tradition in the years to come.